Zurich, January 2019. On January 11, 2019, the first regular share valuation took place as a price determination in Switzerland.  The company from Schwende (AI) quoted CHF 5.00 for the share and CHF 4.15 for the participation certificate for the first time.

On the first day, the prices were already raised by about 5% compared to the first quotation. Aimondo is the sole shareholder of the Düsseldorf-based Aimondo GmbH, exercises its strategic management and plans to position itself as a holding company for the planned internationalisation. The core product is based on systems of artificial intelligence and machine learning algorithms that set the standard in eCommerce. The software is used several times a day to examine entire industries online. Product information, its context and prices are determined together with the provider information. The optimal offer components for customers are derived from gigantic amounts of data – i.e. prices, delivery times and costs, offer descriptions and some aspects that are not publicly known.

With these data condensed into Smart Data, Aimondo customers can determine which position they want to occupy in the respective product market. At the same time, margins are optimized for products in which Aimondos clients are already well positioned, thus ensuring performance. Arne F., a large online retailer who has been using Aimondo on a daily basis for over a year now, 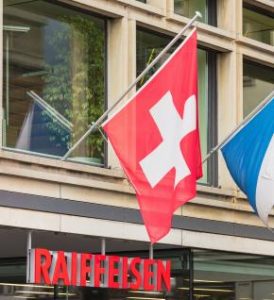 recently stated: “We have specifically increased our sales in the desired segments and redefined margins where we have always been strong. Each percent in retail brings us 8% in the profit and loss account. With Aimondo, we were finally able to break the dominance of Amazon in our part of the online business.”

The company has been active for around two years and only officially activated the Aimondo online service for everyone in November last year. For small companies and larger ones who want to test Aimondo first, the crew offers the services under the Internet domain www.aimondo.com not only at a low price, but quite self-confident even completely free of charge.

The development team consists of 14 nationalities, with whom customers are already served in 18 countries. Recent market entry successes register Aimondo also outside of Europe in Asia. The customers are both dealers, who look for direct sales successes and manufacturers, who find strategically important market information with Aimondo’s assistance. Aimondo is the only company in the world to have a successful mix of Artificial Intelligence (AI) and offers an enormous depth of information as Cloud-based SaaS (Software-as-a-Service) at unrivalled favourable conditions. With this combination, Heinrich Müller, Managing Director of the German GmbH, aims at a meaning and a company value in a league with companies such as Salesforce, Shopify, WIX or Alteryx and other successful SaaS business models.

The key to this is the technological distance to companies that also operate in the field of Business Intelligence in connection with customer proximity and prices, which are extremely favorable and yet generate an enormous EBIT. The combination of AI, SaaS and unlimited infrastructure at the push of a button (Cloud) makes this possible. The company has had its software quality, financial data and earnings prospects tested by expert and renowned auditors – with excellent results.

With the latest, worldwide recognized, also by the Institut der Wirtschaftsprüfer in Deutschland e.V. (Institute of Chartered Accountants in Germany [IDW]), considerable capital reserves could be activated, which enable Aimondo AG to realize its upcoming globalization tasks.

It will be interesting to observe the valuation of the shares by Aimondo as well as its participation certificates in the coming months. Müller, who is also a member of the Board of Directors of Aimondo AG, is convinced that the performance of the shares will lead to a massive increase in value over the next twelve months. Then nothing would stand in the way of the next milestone in the form of quotations in regulated markets.

Until then, only the circle around the founders can enjoy the success of the company – also documented by the ongoing recording of the valuation – which becomes visible on online pages such as those of Raiffeisenbank and others.

Link to the Ordinary Shares

Link to the participation certificates -> 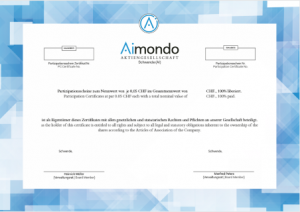 The company will be happy to provide further information.