Aimondo AG is the heart of the global roll-out for the Aimondo online service. The goal is to position the most valuable tool for success in online trading worldwide as a market leader. 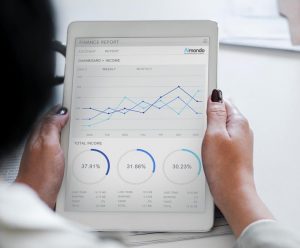 The service characteristics as software-as-a-service with cloud-based infrastructure can generate enormous returns. Typical for this state-of-the-art architecture is that the variable costs hardly increase with increasing sales and the fixed costs in the previously planned area are largely decoupled from the sales development. The higher the turnover, the more distinctive the EBIT.

If one examines successful SaaS companies, they are characterized by comparable features: In the first two years, they generate losses that peak towards the end of this period. This is followed by a relatively short phase to reach the break-even point. Afterwards it goes steeply upwards – with the conversions and the enterprise value. In the early years, profit is of secondary importance in the eyes of investors.

Aimondo GmbH has long passed the phase of “Proof of Concept”. The first two years from the first day in autumn/winter 2016 with sales and real-life customers were used for development. The initial costs were borne by the initiators, they remained well below budget over the period, sales growth began hesitantly. It took longer than planned to win more customers. This was because the main focus was on product development. Several additional functions have already been implemented that were originally planned for 2020 and later. Still below budget with lower costs and better results than ever dreamed of. In particular, the usability has been extended to intuitive operation even by inexperienced users. In addition, around a dozen other countries beyond the German-speaking region were opened up technically.

The public limited company has two types of shares – the common shares, which are to remain largely in the hands of the business decision-makers and the preference shares (participation certificates), which give the high yield-oriented shareholder significantly higher dividend expectation in addition to the expected price increase. Initially, all share certificates were reserved exclusively for the circle of “Family & Friends”. People who knew the circumstances, the people and the company or who were recommended to get to know us from our circle of acquaintances. Today, investors who got to know us through our activities, recommendations from other investors or publications also belong to this group.

In a first stage, the common shares are certified as registered shares. Collective custody had been an aim for the fourth quarter of 2019 – in which the certificates could be exchanged for deposit. In the case of a planned capital increase, ordinary and preferred shares are issued in a ratio of 1: 2. As soon as a sufficient number of shareholders has been reached, we aim to go to a regulated stock exchange. The NASDAQ Nordic or similar.

This third financing round, which is envisaged in the overall framework of the Aimondo project plan, can be understood as predominantly pure growth financing in order to accelerate expansion and development into new markets and industries. For this Aimondo Shares should be listed in the standard or main segment. The growth is to be accelerated progressively over three different dimensions. On the one hand, the AI is to be further developed in order to position us even more efficiently in the field of predictive pricing. On the other hand, the Asia-Pacific region is to be developed in order to scale the strong growth of this region. Finally, the step towards stationary trading, multi-channel or cross-channel retailing,including comprehensive Product Information Management (PIM) data management and the Electronic Shelf Labeling (ESL), is to be realized. As already stated elsewhere, this step offers revenue potential that is momentarily still several times bigger than the online segment.

The planned profitability within the planning period beginning at „2020 plus“ can be derived analogously, just somewhat delayed from the original business plan of Aimondo GmbH. Institutional and private Investors can request this as well as the actual “fair value” expert opinion.

Share Value Publications (not available to the public, please ask for specific information exclusively for “Family & Friends”-members and visit the password protected area):